I had to take a few days break from playing in-between these parts, as I was devastated when happened next.    I was all set for completing another achievement with a career that my Sim died.    Who was it, I hear you all shout … ?

It was the criminal career which can only suggest one thing, DEVLIN.   Normally I would play with good sim’s, but all through this legacy I have been using generator’s for traits, aspirations and even careers to give my gameplay a little more excitement and the basis for this story.

Anyway, back to the story, the Grim Reaper appeared as usual. Eleanor tried to plead with him, but she was too late as the Grim had already read his rights and was in the process of converting Devlin into the Urn.   Although everyone didn’t really like his pranks and bad streaks, they still had the sad moodlets, since he was part of the family and did show his good side occasionally.  Eleanor knew it was time to cure everyone’s sadness, so she released him straight to the netherworld without any hesitation.  I can’t even imagine what he would be like as ghost, so didn’t give him the chance.   Could have possibly been either amusing or annoying gameplay, who knows?  Maybe in future generations we will test it out. 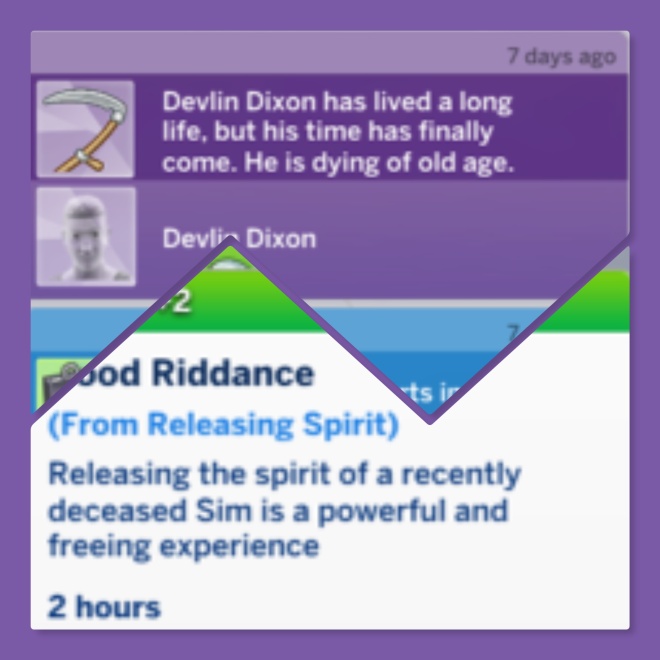 Harrison decided he wasn’t going to his scout meeting but continued to create some sad pictures and eventually complete his childhood aspiration.   Gracie completed her homework and headed out for jog while Freya lounged about after also completing her homework.    I’m not sure what Aditya was doing, must have just kept himself to himself and away from everyone.